The best that can be in tweezers 60 years of Rubis 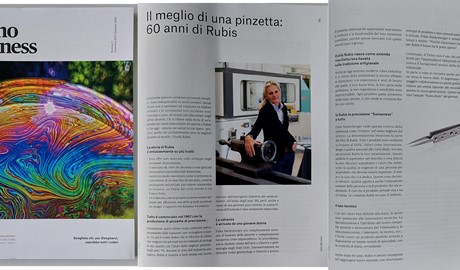 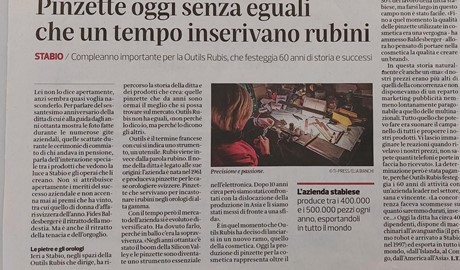 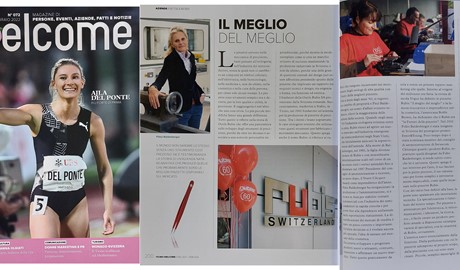 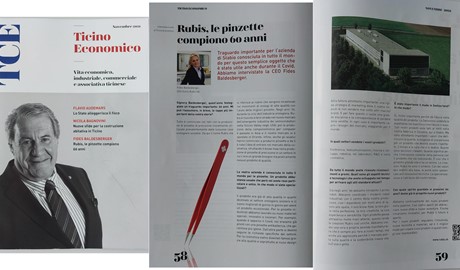 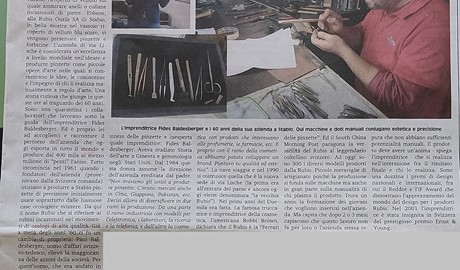 Tweezers may be simple tools. Nevertheless, they are indispensable in many contexts. Without them, there would be neither computers nor mobile phones. The demands placed on them have grown and become more multifaceted in recent decades. This is reflected in the history of a company that was founded exactly 60 years ago in Stabio/Ticino (Switzerland) and today - at least in the sectors in which it operates - produces what are probably the world's best tweezers: the Rubis Outils.

The story of Rubis is exciting on several levels:
It offers an insight into the development of precision tools, it has been associated with a remarkable female entrepreneurial personality for over three decades, it shows in an exemplary way what successful Swiss brand building looks like, how industrial production can be maintained in the high-wage country of Switzerland in addition  to a strong Swiss Franc, and how tweezers can be used to address one of the great questions of design, the question of the relationship between function and aesthetics.

It began in 1961 with the production of precision tweezers
which were initially used mainly by the noble Swiss watch manufacturers. Hence the name Rubis - it refers to the rubies that are used as bearing jewels in high-quality watch movements with the help of the finest tweezers. In the 1970s, during the crisis in the watch industry, Rubis succeeded in opening up a new market in the emerging semiconductor industry. In the early 1980s, however, due to management faults, among other things, the survival of the company was seriously threatened.

Rescue came from a young woman
who was a complete stranger to the tweezers business and completely inexperienced as an entrepreneur: Fides Baldesberger. She had previously studied art history in Geneva and gemmology in the USA. She subsequently worked as a gemmologist in Geneva and at the Antwerp Diamond Exchange. From 1984 onwards, she gradually took over the management of the company inherited from her father. With diligence and tenacity, thanks to a clear-sighted analysis of the problem and a series of wise decisions, she succeeded in making Rubis fit for the future again. “The decisive factor was the idea of entering the cosmetics market.” Fides Baldesberger says. “Why not harness the know-how in the manufacture of precision tweezers in an area where there is a great need but virtually no quality products?” In 1988, Baldesberger was awarded the Veuve Clicquot Prize for Businesswoman of the Year.
This was followed in 2001 by the prestigious Ernst&Young business award.

The road to success, however, was long and rocky:
all on her own, she had to develop and design new, attractive products, build up a brand and promote it without the help of the usual marketing Agencies of global players. Around the turn of the millennium, it was done: fashion magazine Vogue named the Rubis tweezers the "best of the best". The famous American make-up artist and cosmetics entrepreneur Bobbi Brown declared that the Rubis is "the Ferrari of tweezers". And finally, the South China Morning Post compared the all-round versatility of the Rubis eyebrow tweezers with that of Swiss Army Knife by saying – “Rubis tweezers are like a Swiss Army knife for (eye)brows”. Numerous design awards attest to the international esteem in which Rubis products are held.

It takes years to develop a timeless classic like the Rubis tweezers. “Aesthetics are essentially the result of function. Aesthetics,” says Fides Baldesberger, “is almost a moral obligation for us.”
“In addition to the technical competence and precision, users of electronic tweezers especially appreciate the beauty and functionality of their everyday tools.  Because they often work with these instruments all day long.”

Rubis was founded as a manufacturing company based on traditional craftsmanship.
Even though there are modern industrial robots today, the employees, their know-how, their joy in perfection, their experience and sensitivity are still at the centre of production. Each product passes through many careful hands, which makes Rubis products so unique.

Swiss Precision means everything here.
Baldesberger sees this striving for perfection as Swiss in the best sense of the word. Swissness is part of Rubis' DNA. All products are 100% Swiss made. Values such as innovation, design and quality, which are associated with it, find their embodiment in the Rubis products. This meets the expectations of the brand and creates trust in it.

Above all, values define quality, it is a person's requirements for a product that must be met, and it defines the time and care that goes into it. These are relevant decisions. Quality also means the constant interaction of the person with the product they are making. This is how the product comes to life and has a soul. Rubis creations symbolize this.

The technical side With well-defined values at the core, the doors to technical innovations are wide open. Specialization is the attribute of our times. For tweezers made for electronic equipment, telecommunications, laboratories, research, etc., it is easy to create a perfect product by having a wide variety of specialists; with Rubis' creativity, of course.

After 60 years, Rubis is committed more than ever to achieving new success - with interesting product developments and lively, contemporary communication. Baldesberger is optimistic about the time after the anniversary. “As long as we remain innovative, the future is open to Rubis.”